The most important elements of my personal productivity system are:

The three steps can roughly be considered a pipeline. First I capture all tasks, then I assign time to do them, and finally I manage energy to maximise productivity when working individual tasks. This page covers time boxing and managing my workload through calendaring, the middle stage. 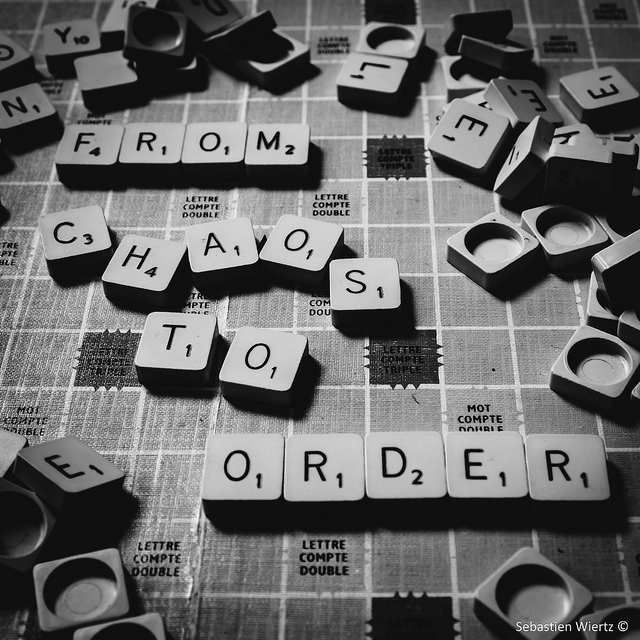 The age old battle to find order - picture by Sebastien Wiertz, CC BY 2.0

Time boxing is a method of time management that's used across teams (particularly engineering teams) but can also be used in a personal productivity context. The insight is that any piece of work involves three factors:

If we change one of these factors there will be an impact on the others. For groups, we often want to keep to a deadline, which means we'll have to change the scope or the cost/quality, in other words fixed time scheduling.

For personal productivity the effect is the same. Assigning tasks a certain amount of effort lets me quantify how much work a task deserves, stopping me wasting time on something when I'm not really achieving additional value commensurate with the extra effort. It's particularly useful for limiting the search of the perfect answer. The basic trick is to estimate the total effort (I refer to this as 'effort estimation') for a task, and then to break down and calendar work sessions (a 'timebox') to complete the task. The calendaring stage is important for avoiding procrastination, creating commitment and managing overall workload. At a visual level everything that has to be done is in my diary: while timeboxes and effort estimation are important, this system really took off for me when I added calendaring everything.

Using time and effort as the limiters inherently means that scope or quality have to be sacrificed. However, there are circumstances where that's not an appropriate trade-off which is why I have an 'iteration' step where I can add additional timeboxes onto the task. I'll discuss task management elsewhere, but for now it's key that every task has to have both a 'due date' and a 'start date'. The purpose of the 'start date' is it ensures I start on tasks early so that if additional effort is required there's enough calendar time available to do so. This lets me have some flexibility in the system.

As noted earlier all tasks are captured in a task management system. First thing on Monday I examine the 'start date' of all tasks to see if they begin this week. If they do I start timeboxing and calendaring them. The steps are: 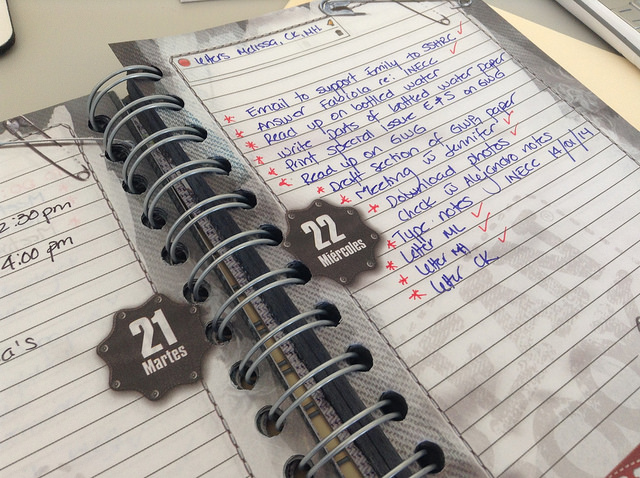 Any list will do - picture by Raul Pacheco-Vega, CC BY NC ND 2.0

When a task comes in it's triaged, if I accept the task then it's immediately given an effort estimate. An effort estimate is how much work time I think the task will take in total. A time box is a session of work on a task. A task can take multiple sessions of work to be completed. For example, I might estimate the effort on a task to be four hours, and then break that down into two one hour timebox sessions.

Some tasks will only take 5 minutes (e.g. 'Send email to Bob'), while others can take many hours (e.g. 'Create FY budget') of effort. I find that if something is 5-15 minutes of effort then it's best to chunk these up into an hour of 'Doing tasks' rather than record a whole load of items on my diary. For bigger tasks I break them down into boxes of between 30 minutes and 2 hours: the minimum session I work on a dedicated item is 30 minutes. In my head each unit of time is 30 minutes, so a 1.5 hour effort estimation is 3 units - this comes up later when I calendar individual working sessions. 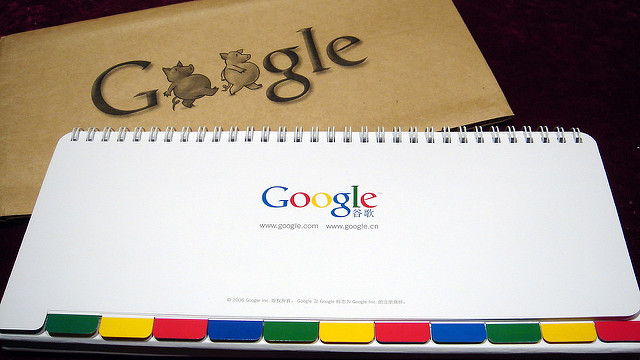 The calendaring step is really important because it carves out time for the effort on a task (a time box) and commits me to a moment to work on it. It became much more effective when I started calendaring everything, not just meetings. A meeting is just one type of activity that I have to do, leaving other activities out of my calendar gave me the false impression that I had lots of time.

There's a lot of dynamism in organisational life so no diary stays fixed and inviolate. If a big issue comes up, then my diary might get blown up for half a day. While this system appears quite fixed I find it helps me to be be flexible because I can easily see what my priorities are and I can easily shuffle time slots around to achieve my goals.

It will be no surprise that I'm in favour of organisational wide open diaries, using an electronic system. However, from a personal productivity perspective I don't think it matters what type of calendar system you use, paper or digital, as the objective is to clearly see your time commitments for the day or week. The main considerations for calendaring are: 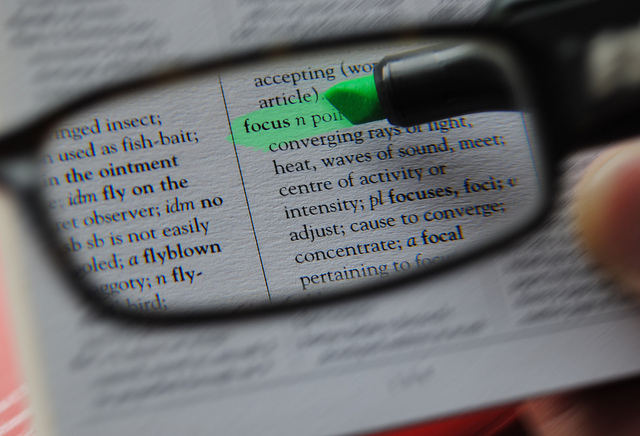 Time to focus - and not look up the meaning of focus! - picture by Mark Hunter, CC BY 2.0

This system is mechanistic, it works if you follow it completely. I have to be disciplined about switching to work on the specified task when my Calendar shows the alert. When the time box is active I work the task, when the session comes to an end I switch to the next item.

We're all human, and some days are more difficult than others, so I do allow myself limited flexibility to move things around to suit my energy levels - but I try to limit this otherwise the temptation is to do the things I prefer and not do the 'hard yards'. The key principles are: 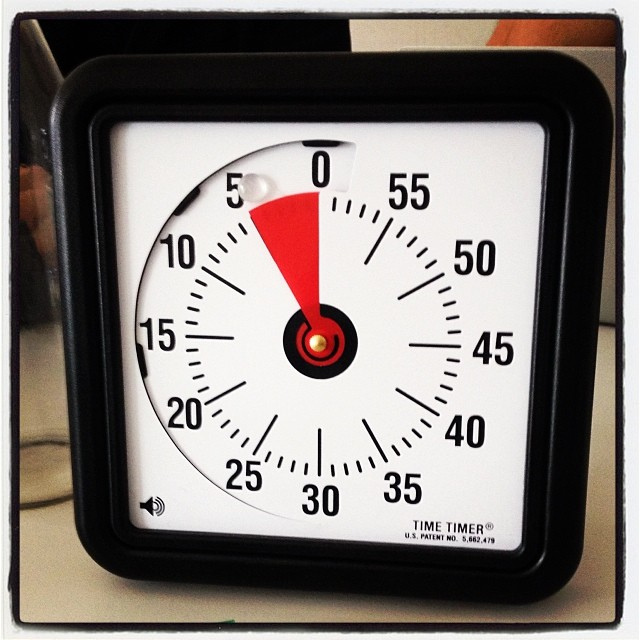 Alarm ahead of the end of a Timebox really helps! - picture by Christian Stocker, CC BY SA

The effort estimation tells me how much work a task will take and how much effort a task is worth. There are some temptations when estimating effort - there's no point giving myself lots of slack, by saying something will take two hours when it will only take 30 minutes: I'm not measuring productivity "over performance"! Equally, there's no point pushing myself up against deadlines by under-estimating. There's always more work to be done, so I can always add more tasks if this weeks set of tasks are done: this has never happened!

For complex tasks as the outline of the problem space becomes more clear the initial effort estimation can turn out to be wrong. At that point I have to iterate the effort estimate and calendar new timeboxes. If effort estimates are being iterated a lot, there's a problem. Considerations are:

This is a rough example showing how it all comes together into a final calendar. There are lots of systems for managing task lists and calendaring, it can equally be done on paper. The Daily Priority tasks are some tasks from the Weekly task list that I select to complete that day, generally it's between 4 and 8. The Projects list is active projects that are currently running. Finally Deferred/Not attending is an example of dealing with items that aren't going to be achieved - something a lot of task management systems miss.

As you can see from the Calendar table, this system provides a lot of clarity for what will be done and when it will be worked on.

For any work management system a key question is how much committed work should there be versus flexibility to respond to issues. This is partially dependant on the role. The example above shows about 35 hours of work, with email and administration taking around 8 hours and regular meetings taking 14 hours. This leaves a balance of 13 hours for project work.

That level of weekly utilisation is a bit high. I've tried to show a reasonable mix, but perhaps there's too much variety for one week. It shows around 7.5 hours a day of committed effort and not that many gaps for dealing with things that 'come up' during the week. From my experience, around 5.5-6.0 hours a day is the maximum that should be committed calendaring, whether for meetings or actual work: a couple of hours a day are easily used up by new things turning up. As importantly, if you're doing everything back to back there's no time for creativity or consideration - ironically perhaps I commonly calendar 'thinking time'.

I'll deal with utilisation and creativity more in the energy management page.

If you have comments or questions about this system please leave a comment below!