The terminal doesn't have look boring. XTerm's colour support can bring a rainbow of effects to our directory listings!

As you'd expect XTerm has great support for 256 colour, but setting up all aspects of the terminal stack can be quite involved, so we'll look at the main elements. I use Vim primarily and want the rest of my terminal applications to use similar colours, so first we'll look at how to use Solarized which is a great theme, then how to to build up a terminal theme based on a Vim theme (Molokai). This post builds on the previous one - introduction to XTerm and TrueType fonts configuration. UNIX has been around since the 1970's so you might think colour support would be easy. But, terminal emulation is complex as it lets the user connect to systems with different capabilities. This complex capability means there are lots of pieces that can cause difficulty.

Most of us aren't using complex terminal emulation, we're just connecting to the local system over a virtual terminal. We have essentially two levels, system support and each terminal application has to support colour itself. In XTerm you can test the status of your colour support with:

If it reports 256 then you're in good shape. To confirm that it can display the colours download a script that generates all the colours for you [1] and check that that they're all visible.

It's a bit clearer why application support is a challenge if you think about the stack of building blocks users interact through. For example:

Each step in the stack must report it's settings correctly, this is generally the $TERM environmental variable but there are other aspects. For XTerm, you should check what $TERM is reporting when it's launched, and if it's not xterm-color then add this setting to .Xresources:

To test that colours are working in XTerm there are a couple of console applications that are useful:

Vim
Under normal circumstances this is the easiest and there are lots of themes that use colours. It's useful to test side by side in XTerm and another terminal emulator (e.g gnome-terminal), and to test under tmux and plain terminal session. I had colour differences under tmux until I got the right $TERM set-up.
Man

Man has colour support if your pager supports it. To set it up you can do:

Ranger
Ranger is a vim like file manager that works in the terminal. It has colour support built-in.
ls
ls with colour switched on displays in XTerm. It has colour support through the dircolors command which exports the LSCOLORS environmental variable. On Ubuntu there's a standard switch in the supplied .bashrc that you can uncomment to load it. 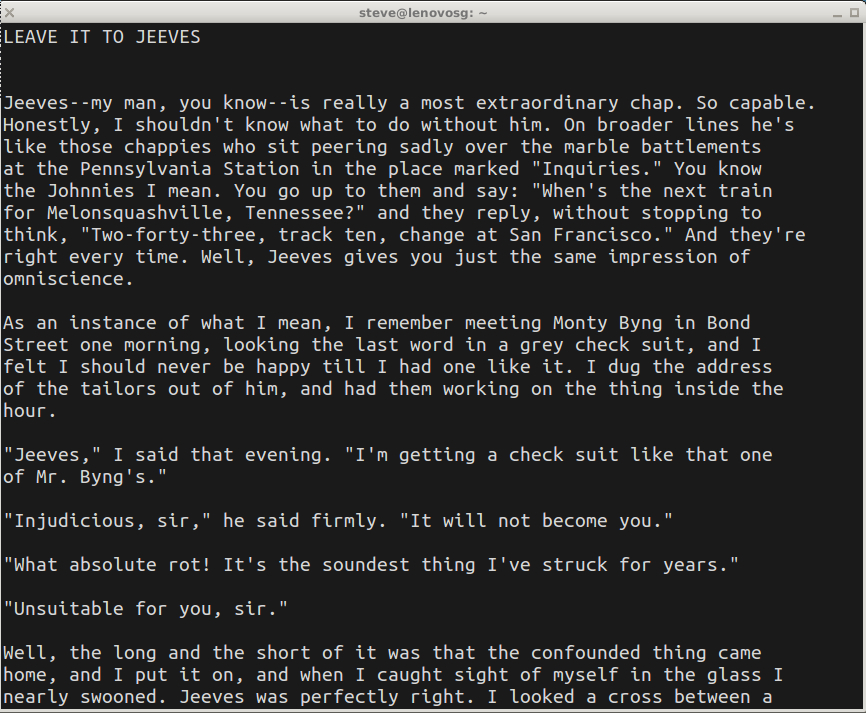 XTerm has a range of settings where you have to specify a colour. You do this by providing an RGB value, the preferred way is rgb:XX/XX/XX but most people use #XXXXXX. We'll start by setting the foreground and background colours.

As before, we add lines to our .Xresources. If you look on-line you'll see examples similar to these:

The capitalisation at the start of XTerm means it's a class definition. To be more precise we can use all lower case which matches instances of the XTerm application, xterm*foreground. Either works fine. Cut and paste the setting in from above and reload X should lead to something similar to Figure 2.

As you can see it's a class hierarchy and the * lets you match intervening sections. If you're having problems with any XTerm setting make sure you don't have a general setting that's interfering. Finally, some colour themes are designed to match all X clients, for example:

There are a further 16 colours to define. They are split into two sets of seven: color0 to color7, and color8 to color15. The second set of colours are supposed to be bright versions of the first set, for example colour8 should be a bright version of color0.

We can use these colours to create themes, the best source for terminal colour themes is the Wayback machine of Phraktured.net. Here's one of the themes from there that works quite well:

After adding it to .Xresources, reload with xrdb -load .Xresources and launch a new XTerm. See Figure 3 which shows the theme in action, Tmux running with the top panel running ls of a directory with various file types, and ranger in the bottom panel. 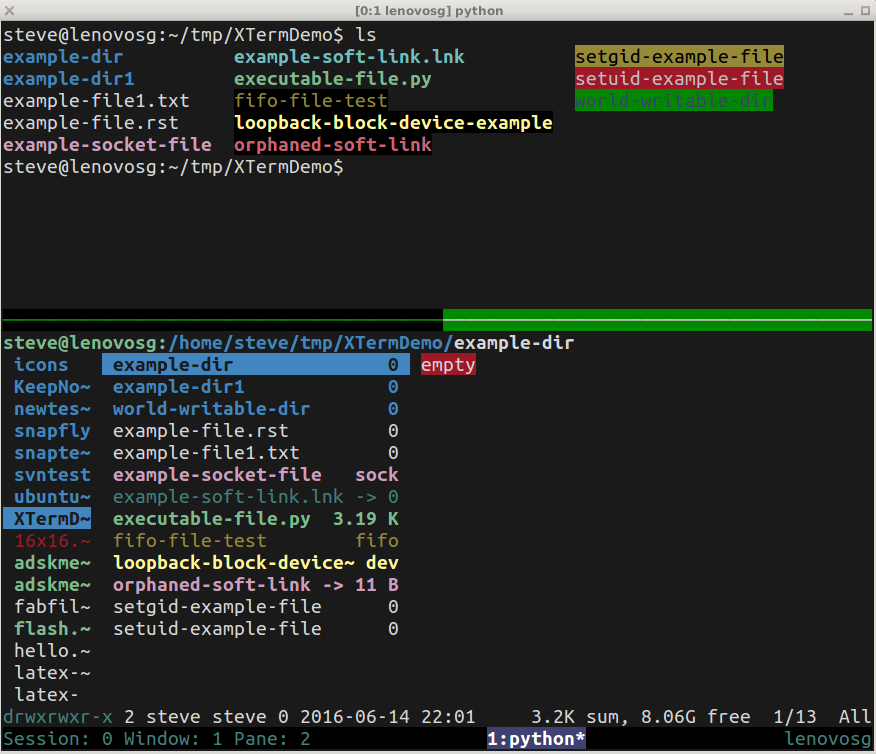 As you can see ls now displays different colours. These file type colours are part of the standard install but can also be altered, see this post on dircolors [2]. You'll see in all the screenshots that there are small differences between applications choosing colours for different file types (ranger colours video files differently to ls for example), but I'm prepared to live with that!

There are lots of other themes out there such as those on Xcolors and on dotshare.it

Solarized is the most popular and complete colour theme, covering a lot of editors and tools. The advantage of using Solarized is that someone has already put all the effort into creating the configuration files - yay! We're going to use the XTerm, dircolors [3] and Tmux configuration.

To set-up XTerm do the following:

Download the Solarized Xresources.dark file
Download it and save it to a file, say .Xresources.solar.
Load it into .Xresources
Somewhere in .Xresources add a line:

Load it into X's server
At the command line do:

Test it's working in XTerm
The background and foreground colours in XTerm should have changed. If you launch xclock or imagemagick you'll find that their background and foreground have also changed, because Solarized configures *background which alters all X clients. You can also run xrdb -query to see a listing of the X resources.
Set-up dircolors
The next step is to provide a ~/dircolors file so that when ls is called it uses the Solarized colours. There are some gory details about the choices depending on your terminal emulator, see the details at Seebi's github repository. The steps are: 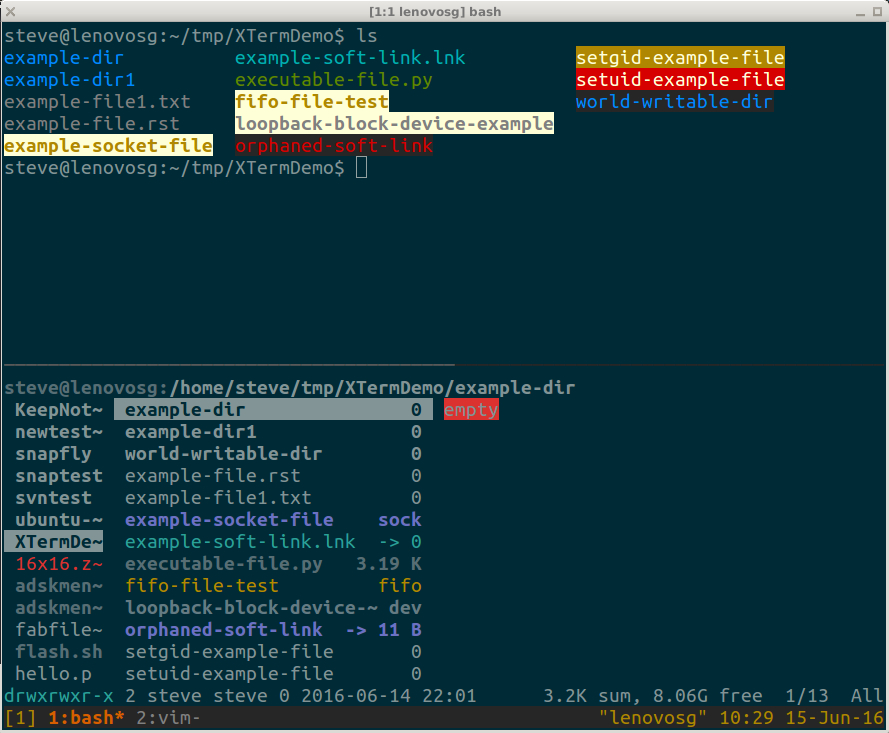 For initial testing you have to use the eval line to bring the new dircolors into your environment. Ubuntu will automatically load the .dircolors file as part of bash's initialisation, so to complete this step you can logout/login again. At this point when you run ls you should have different colours for file listings.

Configure Tmux for Solarized
The last step is to configure Tmux. There's a specific .tmux.conf configuration so remove any colour definitions that you have in your tmux.conf and replace them with the Solarized ones.

That should leave you with Figure 4 which you can compare to Figure 3. The Tmux theme is different and the ls output is also different. The only fly in this ointment (which I haven't been able to solve) is that the colours in ranger are different to those in ls (e.g. orphaned-soft-link).

I mostly use the Molokai theme in Vim as I prefer a bit more brightness. It's not as universal as Solarized as there's only a Vim theme. However, there's a slightly darker XTerm configuration by Vreon [4], which I've played with a bit.

It's quite difficult to work out how all the colours are used. It's worth recalling that the first seven colours (0-7) are supposed to be matched by bright versions (8-15), so 0->8, 1->9 etc. If you want to mess around with your own theme, this table is quite useful for examining the output from ls:

Using the table above, the final .Xresources.molokai file is:

I haven't gone further and configured dircolors to complement it [5]. As you can see in Figure 5 using my existing Tmux configuration, Ubuntu's standard dircolors and this theme, it comes out pretty well! 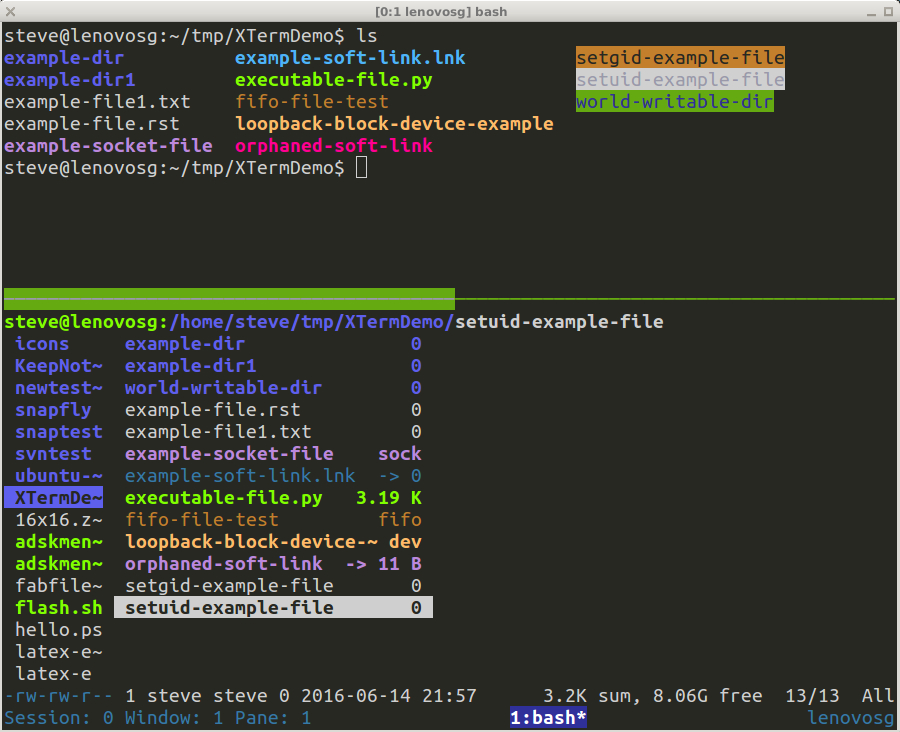 The last bit of configuration that's worth doing is the cursor and the mouse pointer. By default, XTerm will use the foreground colour for the cursor, but there are some other options available:

That's everything that I've found useful for configuring XTerm for general use. Although it was quite a bit of work, when you get through it XTerm looks pretty good and it's very functional.

Hopefully I've captured all the main settings required for a usable experience. There are a lot of options to explore in the manual page. If you think I've missed something important, or found the post useful, please comment below!