This post covers how to set-up LaTeX on Linux (Ubuntu), how to format labels and annotations, and some of the gotchas I've discovered. We'll reserve colouring text for another time.

Matplotlib was primarily developed as a scientific visualisation library, so it's not that surprising that it uses LaTeX [1] for complex formatting. It's fairly complicated to set-up and use if you don't know LaTeX. I'm not an expert on LaTeX so treat this post with caution! Everything was tested on Ubuntu 14.04 LTS and Python 3.

To use LaTeX to format Matplotlib text we have to use LaTeX for all text formatting [2], the downside is that it's significantly slower to complete processing a plot. The output formats (backends) that support LaTeX are limited to AGG, PS, PDF and PGF. Consequently, to create SVG it's necessary to follow a conversion process which means two steps to create a Web ready image. Finally, the grey backgrounds in some styles didn't show up (e.g ggplot, fivethirtyeight and BMH), which makes ggplot in particular unusable.

With those constraints in mind, our first challenge is to set-up LaTeX.

Texlive is a distribution of LaTeX [3], it's available through the Ubuntu repositories. Installation is simple:

This is a very large download (~500MB), you can reduce it a little bit by removing the documentation.

There are a couple of resources on checking that your LaTeX environment is working correctly [4]. The core of the instructions are to create a file called 'test.tex' and put the following in it [5].

The first command converts test.text to test.dvi and the second command lets you view it with xdvi so you can check the formatting. Rather than converting to DVI, the third command converts from LaTeX directly to PDF.

With LaTeX installed and functioning on the system, the next step is to confirm it's working correctly in Matplotlib. The Matplotlib documentation covers using LaTeX extensively, see Text rendering with LaTeX. The easiest way to check is: 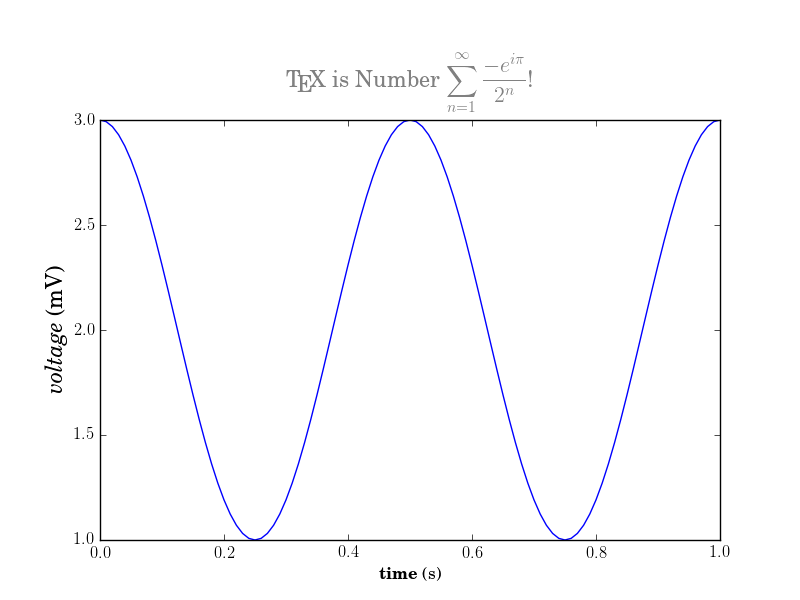 You should see something similar to the figure on the right.

Setting Matplotlib for PDF and XeteX

To create plots we have to decide which output format to use, as conversion from LaTeX to an output format isn't handled correctly by all of them. For example, if we format some text using LaTeX in matplotlib and save directly as SVG (with plt.savefig()) the backend will not process this correctly and we'll lose the formatting. Outputting from Matplotlib as PDF is the best option as it supports vector graphics output, as a second step we can use pdf2svg or inkscape to do conversion to SVG.

For processing we'll hand-off fonts and marking our plot to LaTeX. This means we have to set-up LaTeX fully for processing all text handling elements, and tell Matplotlib's native text handling to get out of the way. It's surprisingly complicated!

LaTeX is a mature system that was created before modern standard fonts (e.g. TTF and OpenType) so by default it's unaware of them. To use standard fonts we set Matplotlib to use PGF [6] and the XeteX processor as these are font aware. The first step is to install XeTeX:

In our plotting source code we tell Matplotlib to use the PGF backend for processing PDF output. This fragment of code goes at the top of a plot:

The default is that LaTeX will use a different font to the general font that Matplotlib uses, it's best to set the fonts explicitly and to tell it how we want the Figure set-up. It's possible to define these settings with the more Pythonic plt.rcParams['blah']='blah' but there are a lot of them, so it's easier to do this [7]:

The various font and axes lines set how Matplotlib processes parts of the plot, we covered many of these in a previous post. Defining pgf.rcfonts to False means that the backend will obey the fonts defined in the pgf.preamble rather than over-riding and using whatever is in your Matplotlib configuration parameters (e.g. ~/.matplotlibrc). The benefit is we're explicitly defining how XeTeX will function, and there's no risk of confusion with Matplotlib using settings from elsewhere. We also tell XeTeX to use unicode (text.latex.unicode) which allows us to send extended characters [8].

The pgf.preamble section has directives that control how xelatex command processes the document for PGF output. These are LaTeX commands to load packages and alter settings. If we were using the standard LaTeX backend then we'd provide an equivalent latex-preamble section. We set \usepackage{fontspec} so that we can define the fonts in LaTeX output, specifically \setmainfont{Ubuntu} and \setmonofont{Ubuntu Mono}. The fontspec package is part of the Ubuntu texlive-latex-recommended package which you may need to install.

This set-up is sufficient to show the Ubuntu font for text output like annotate() and xlabel().

At the moment the Axis (ie the numbers along the X and Y axis) will be in the default sans-serif font: many people consider this to be correct for complex maths which is why it's the default. However, I want the same font on all elements of my plot. Matplotlib defines the font LaTeX should use for the Axis in the Mathsfont setting which also controls how maths equations display. There are a few options for changing it, depending on your requirements.

Many free fonts cannot display maths script completely [9]. If you use maths script then the easiest option is to use the cmbright sans serif font package. To install it get the package texlive-fonts-extra and put the following in pgf.preamble:

An alternative way to solve this is to update the Axis after it's been plotted [10], but while a clever hack it's messy as it intermingles standard matplotlib labelling and LaTeX labelling.

The last option is to change the font Matplotlib uses for maths. The Ubuntu font is not fully maths capable, but as I'm not using maths script (my graphs are simple numbers) it's fine for my purposes. Consequently, I define the maths font using the unicode-math package. Install the texlive-math-extra package, then in Matplotlib we can do:

It's possible to use any TTF font, the easiest way to see which ones are available on the command line is:

Running gnome-font-viewer gives a visual view of what the font looks like.

Having completed the set-up, formatting text is pretty straightforward!

LaTeX uses a lot of back slashes to express formatting. To represent them in a normal Python string literal requires doubling up the slashes so that Python knows we're not trying to create an escape sequence (e.g \n). It's nicer to define formatting strings as raw string literals for Python, which is just a string with r at the start. An example of this:

This code sets the part of the string "A Python raw string" to be bold. We can use many of the common LaTeX mark-up's for formatting text strings, the common ones are:

The PGF backend doesn't support using LaTeX codes for newlines: according to this GitHub issue [11] the underlying problem is that LaTeX doesn't support newlines in a variety of situations. This is problematic if you're doing a multi-line annotation() or text() but there are a couple of options. The first is to mix raw text strings and normal strings together, putting newlines in the normal string:

The downside with this approach is you have to manually work out where you want newlines.

The second option is to use textwrap.dedent() and textwrap.fill() with multi-line strings. The advantage of the multi-line string is we can tab the text in nicely in the source code, and in the output we can automatically wrap it at whatever length we want. We have to use double backslashes to escape the LaTeX codes properly, and add normal strings if we want to specifically force a newline at a set point in the string:

The output with plt.savefig() should either be a PGF image to use within a LaTeX document, or a PDF document. We can convert the PDF image into an SVG image suitable for the Web [12] using inkscape [13], pdf2svg or pdftocairo:

Generally, the best results are from using transparent=True and bbox_inches='tight' in the call to plt.savefig()

In this example we use the PGF backend with LaTeX to do complex formatting on strings. It was output as a PDF and then converted to SVG for display with pdftocairo. The results are shown in Figure 1 at the top of this post.

These are the most useful resources I found for Matplotlib and LaTeX:

With LaTeX handling the formatting of all text we can mark-up our plots with any form of complex formatting we want. The constraints are that there are two steps to creating Web ready images, grey backgrounds on styles don't display properly and the processing of a plot is slow. Despite those issues I think the results are worth the extra effort.